This year's NHL season was filled with many ups and downs both on and off the ice. Here we look at our highlights for the 2011-2012 NHL season.

#PickPhilPhirst
#PickPhilPhirst was one of Shelly and my proudest moments. Thanks in large part to SkinnyPPPhish and the rest of the PPP crowd, enough people tweeted Joffrey Lupul to get the hashtag trending in Toronto (very briefly, but whatever) AND we even made Puck Daddy. Here's a screenshot to prove it: 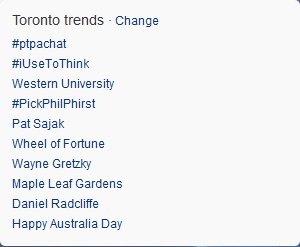 Evgeni Malkin on Twitter
Even though he's been awesome forever, I think it's safe to say Geno went through an image makeover last summer. From videos of him training with Mike Kadar to opening a twitter account, he's been making a conscious effort to interact with fans more often, and the results are just precious. He followed a bunch of us fans, and although he unfollowed most of us right away (me about six months later) it was still pretty freaking awesome. Not to mention his adorable, funny, and sometimes random tweets and pictures. Plus he won some stuff this year too; overall, not a bad season for Geno.


Lupul at the All Star Game
The All Star game was probably the peak of the season for Leafs fans. It was all downhill after that. But man, was the All Star game good. Joffrey Lupul's response to the boos from Ottawa Senators fans (apparently they do exist) was marvelous, ("I wouldn't want to be cheered here anyway") as was his two goal performance in the (meaningless, but fun) game. Kessel also scored, and "Suck it, Phaneuf" will never be forgotten. At least by me.

Sid Returns
Sid's injury(ies?) sucked, to put it lightly. Although his first return was eventually cut short, he came back again and proved to everyone that he really was back. That ruled.

The EBERLE Twibbon
Who doesn't love Jordan EBERLE, really? With that in mind, the members of the exclusive EBERLE club (s/t Simran and Gabby.. and us) made a twibbon for EBERLE fans everywhere, or at least the ones on twitter. It's beautiful.

Dustin Brown and his Wife
The Kings winning the cup (and defeating the Vancouver Canucks in the first round) was awesome enough on its own. They had a miracle run, led (obviously) by goalie Jonathan Quick, (slovenian!) Anze Kopitar, and captain Dustin Brown. My personal favourite moment from the Stanley Cup celebrations and maybe even from the playoffs altogether was this: 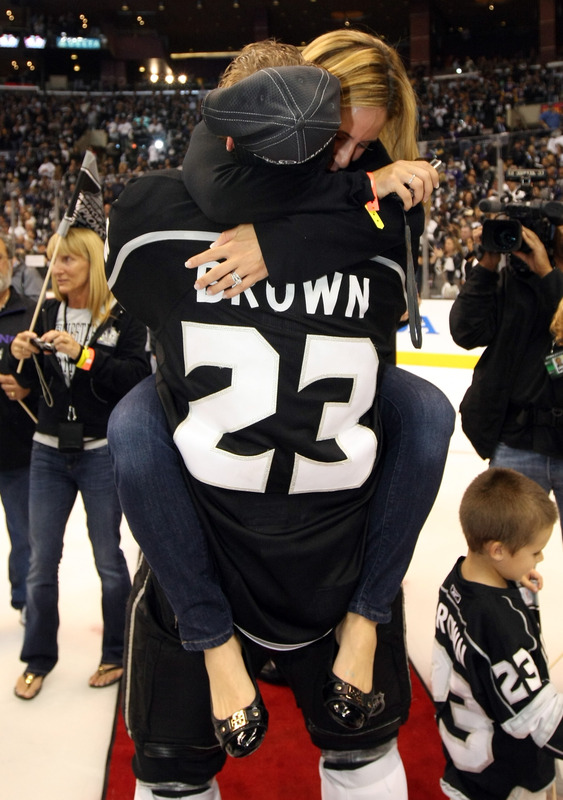 It might be a stupid thing to have as your favourite moment of the playoffs (and it is closely rivaled by the beating Giroux lay on the Pens in the first round) but it's cute and romantic and everything I someday want. Don't judge me.

Carey Price
Carey Price was so awesome this season that he made me love him. And he's a Hab. I do feel shame about this, but then I go look at this picture and my day is made, every time. Jake Gardiner
Jake Gardiner was one of the lone bright spots for the Leafs this season.  He had 30 points (7 goals) in his rookie season, and there's lots of promise there for years to come. He also helped lead the Marlies to a berth in the Calder Cup finals, gaining some valuable playoff experience in the process (insert 'leafs never make the playoffs so why does he need experience' joke here).

First in the League
Once upon a time, the hockey gods took a break from trolling the coolest team in the world. What resulted was complete anarchy. The Leafs were first overall -- that's right, first in the whole league -- and we had a grand old time. Some people didn't join the festivities, but hey we all knew it wouldn't last. Sniff. 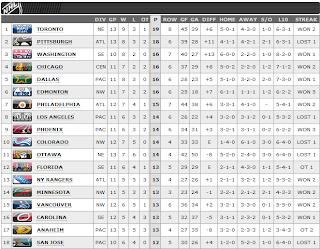 HBO's 24/7
I still like last year's 24/7 better, but it was pretty cool again this year. Even for me, a Pens fan, it was fun seeing the Flyers and Rangers behind the scenes (even though the Flyers can screw themselves). The success of 24/7 has spawned similar shows, like the Oilers' Oil Change, the Pens' In the Room, and the NHL's own NHL 36. And Ilya Bryzgalov.

Leafs in the Winter Classic
In late January, before the Great Collapse, the NHL announced that the Leafs and Red Wings would be playing in the Winter Classic at the Big House in Ann Arbor, Michigan. This was very exciting at the time, of course, as we all expected the Leafs to be in the playoffs. It still is exciting, especially the prospect of seeing Grabbo on 24/7, but now I'm mostly hoping the Leafs aren't completely embarrassing throughout the whole process.

Zdeno Chara is a Pink Bunny
Presented without comment: 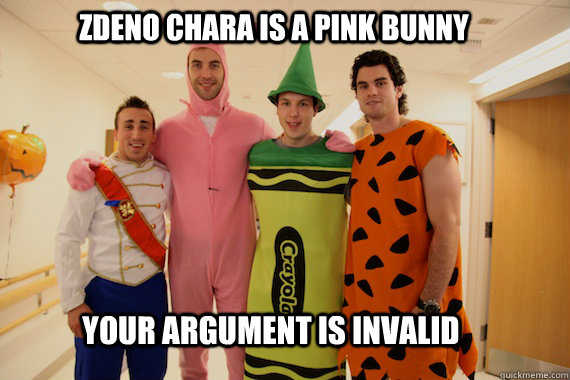 It really wasn't a great year. Here's to hoping next year's season highlights post will be a lot better.
Posted by gingersnowflake at 11:42 pm

This is a correct blog for anybody who really wants to be made aware of this topic. You understand so much its practically challenging to argue along (not too I actually would want…Ha-ha). You certainly put the latest spin with a topic that's been discussed for decades. Great stuff, just wonderful!
고스톱

There are some fascinating closing dates on this article but I don’t know if I see all of them middle to heart. There may be some validity however I will take hold opinion till I look into it further.
스포츠토토

What’s Taking place i am new to this, I stumbled upon this I have discovered It positively helpful and it has aided me out loads. I am hoping to give a contribution & assist different users like its helped me. Great job!
성인웹툰

I am really impressed with your writing abilities as smartly with the format on your weblog. Is this a paid subject or did you modify it yourself? Either way stay up the excellent quality writing, it is rare to peer a nice blog like this one nowadays.
토토사이트

gingersnowflake
Our names are Shelly and Emily and we’re two university students that love hockey. Emily also loves baseball, but that’s because she’s weird. Our favourite team is the Toronto Maple Leafs, and Shelly also loves the Pittsburgh Penguins. We also love Jordan EBERLE, Jeff Skinner, Bruno Mars, food, Castle, and other stuff I can’t think of right now. Follow us on twitter @itwasfourone and @emilyg819

View my complete profile
Email Us